FlighControlReplay Professional v3.5 out now for p3dv4 and fsx

FlighControlReplay Professional v3.5 out now for p3dv4 and fsx

Thanks to Users and feedbacks I m proud to annouce new FlightControlReplay Professional v3.5, one of the most complete flight recording software that permits to record and play flight situation and a lot of useful things. This v3.5 version include last version of SimFramework internal engine that adds a lot of useful features after a long job started when I released v3 in late 2016. This new version add also full compatibility with P3D v4

- PlayAsAI(Plasy as Traffic) . User can choose and play his preferred Recorded Flight as AITraffic. You have all options available that you already have in standard playing mode, change simulation rate onthefly or use User Interface Yellow Slider for choose exactly where your AI Traffic can start his flight. You can manage more than one recorded flight as AI Traffic using more than one instance of FCR addon at the same time. NEW with v3.5


- PlayMode Simulation Rate. User can modify SimulationRate (during the PlayMode) using 4 buttons in main User Interface (2x,4x,Slow and Fast). This permits for example to compose a video or analyze in a better way a flight. NEW with v3.5

- Multi Instances. Thanks to the system architecture renewed now you can manage more than one instance of FCR at the same time. NEW with v3.5

- Record and Playing a lot of airplane variables:

- User can choose sample rate for record a flight (6 times per second , 1 time per second, Custom Visual Frame per second, every 4 seconds and Automatic ).

- Custom Altitude Trigger Value for Start Recording. User can choose at which Altitude (Above or Below) the system can start record flight.

- Voice Command Recognition for all record and play features of FCR. Now you can speak to software and it records, play, go forward and go backward according with your voice command.

- Record a flight situation and also your voice during flight.

- Start flight from an entry point of a recorded flight that user can define.

- Zoom In and Zoom Out flight simulator point of view from FCR client.

- Stop playback at any position to continue manually with FCR yellow slider.

- User can define an hardware shortcut for start / stop recording, start / stop playing and forward and backward (this is useful if users use full screen FlightSim option)

Post-Flight Analysis
What to do with recordings? To review and comment on them, as with an educational debriefing tool, or to recall good times ... It is enough to launch a flight in FS X (no matter the plane and the place) FCRP interface and load a saved flight.
As soon as FS X switches to the recording and reproduces identically the flight, the manipulations, the angles of view. It is possible to change camera or zoom.
You can speed up playback or pause, advance, or rewind. To go further, FCRP includes a voice module (in English, not tested here) that starts the recording on an order given to the microphone.
It also allows you to automatically start a recording from a given altitude (above or below), and it can export
its results in KMZ format so that the routes are viewed in Google Earth.
It can even record audio from the software or from a third-party source, such as an instructor microphone.

Discretion in the background.

Pedagogical character to analyze a flight after the fact. 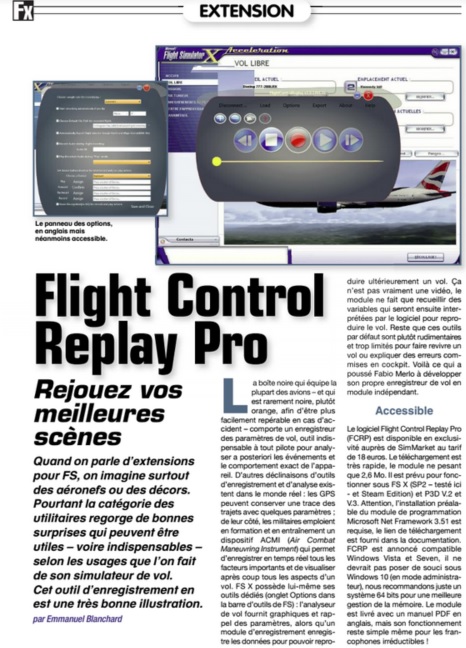 This addon is available via SIMMARKET

FOR COMMERCIAL USE PLEASE CONTACT ME at flightonfly@gmail.com
Top

Re: FlighControlReplay Professional v3.5 out now for p3dv4 and fsx

Re: FlighControlReplay Professional v3.5 out now for p3dv4 and fsx

REAL TIME SMOOTH MOVEMENT using Recorded Flight and PlayASAI feature! You ll can fly in Formation with prerecorded flight with smoothness and you ll can see your Recorded Flight using ALL CameraViews you want!!

Only in P3D v4.1 because finally Lockheed fixed a bug that it was introduced since FSX and i was able to use full potential of SDK.
Top
Locked
3 posts • Page 1 of 1