The world's demand on the aviation industry is constantly changing. However, without dreams and incentives America would not lead the innovations to meet those changing demands. As a young boy, I frequently would visit my father, an airport manager to ponder about my future dreams. I would gaze out the windows of the operations building in amazement when a new aircraft would pull into its spot. During my college years, and as a member of the Bergen Community College Wings Club I was fortunate enough to visit the Lockheed-Martin Fighter Demonstrator Center in Arlington, VA. A participate in the STEM program Lockheed-Martin a world renowned leader in V/STOL technology, as demonstrated in the F-35B Lightning II. I was inspired by the Emil Buehler Aviation Education Center's teaching and department staff to raise my expectations and go for the next level, a STEM proposal.

A vehicle that can operate from both heliport and short fields will be necessary in our fast-paced future. I believe our design can meet those demands. The objective of our STEM proposal is to provide a low cost solution to unmanned V/STOL cargo operations. UV-4 V/STOL UAV is an unmanned vehicle designed to transport cargo. With an interior cargo bay the goal of our project is to transport at anytime, anywhere in any condition.

On behalf of Bergen Community College, our Aviation Program and the Wings Club. I would like to submit my idea, and begin a new STEM initiative. Thus I request your consideration for grant funding to help us complete adequate research and help us reach our goal of one day reaching development of the UV-4.

Updated work in progress, our program is featured on http://bergenstem.org/ under the project section. The college has also created a online blog located at http://uv-4stem.blogspot.com/

Building a flying prototype, scheduled to be completed by Spring of 2016. My senior year of studing aviation at the Bergen Community College.

Very good rob, Wishing you all the best of luck with your new Releases :)
Elaine Dixon
Prepar3D® Forum Global Moderator

Much has been learned at our flight research laboratory, we are excited to provide you the best in rotorcraft innovations.

Bergen Record of New Jersey article regarding this STEM initiate! 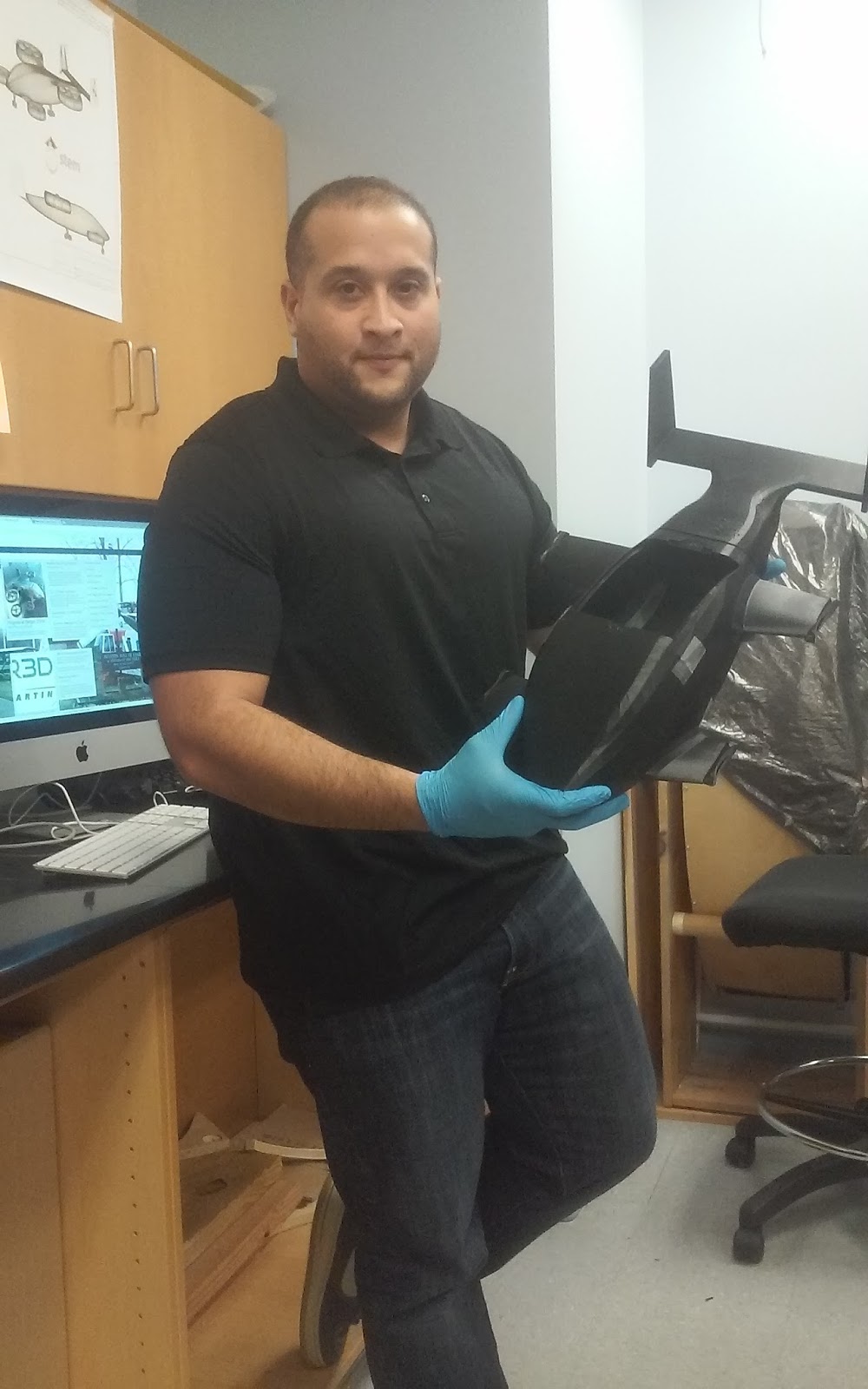 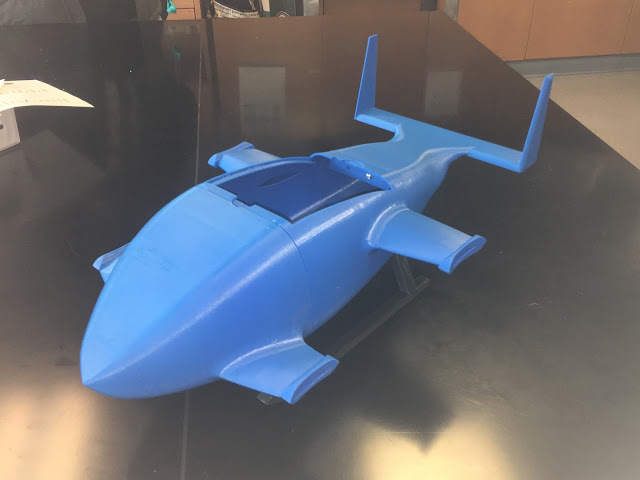 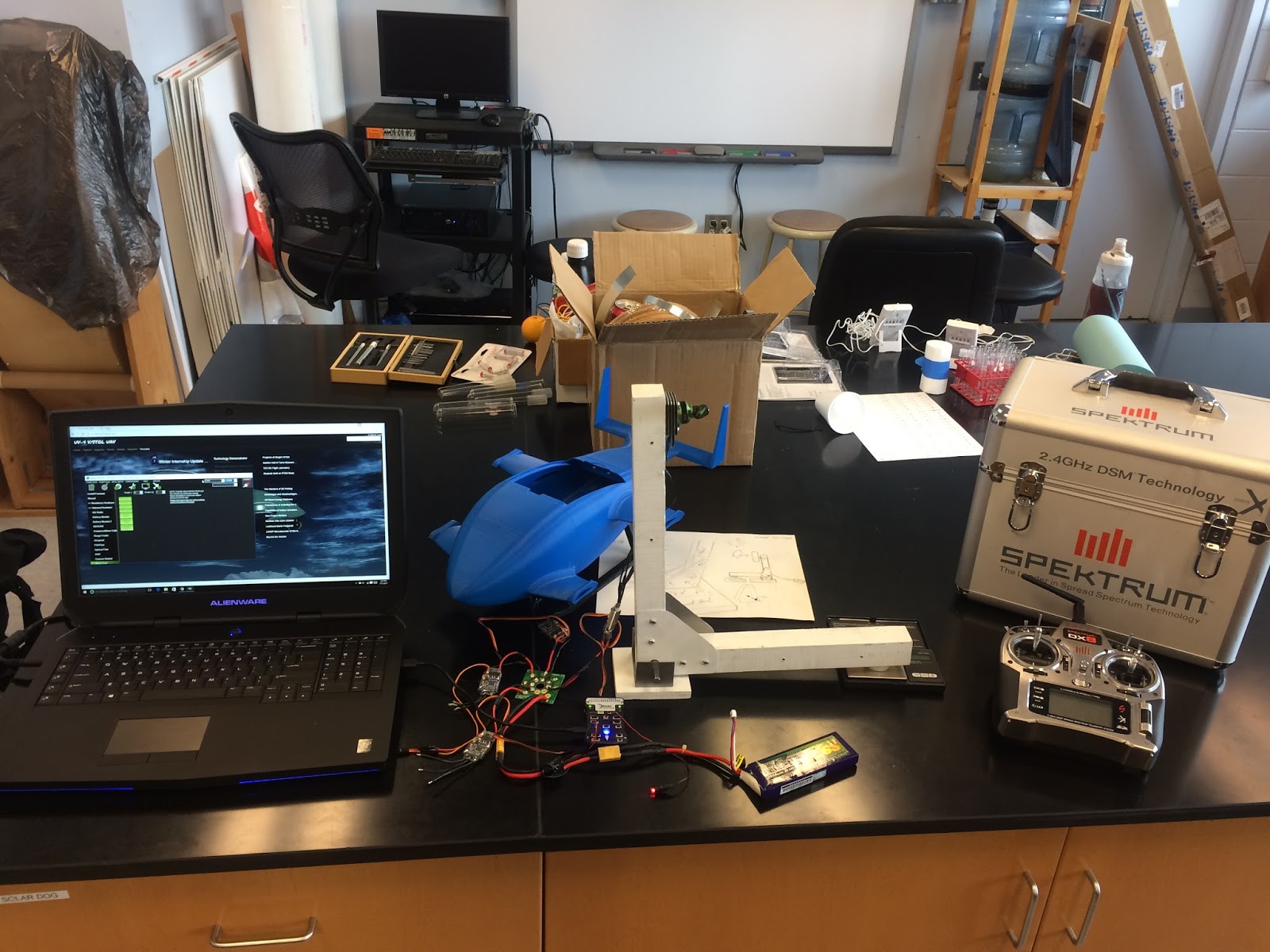 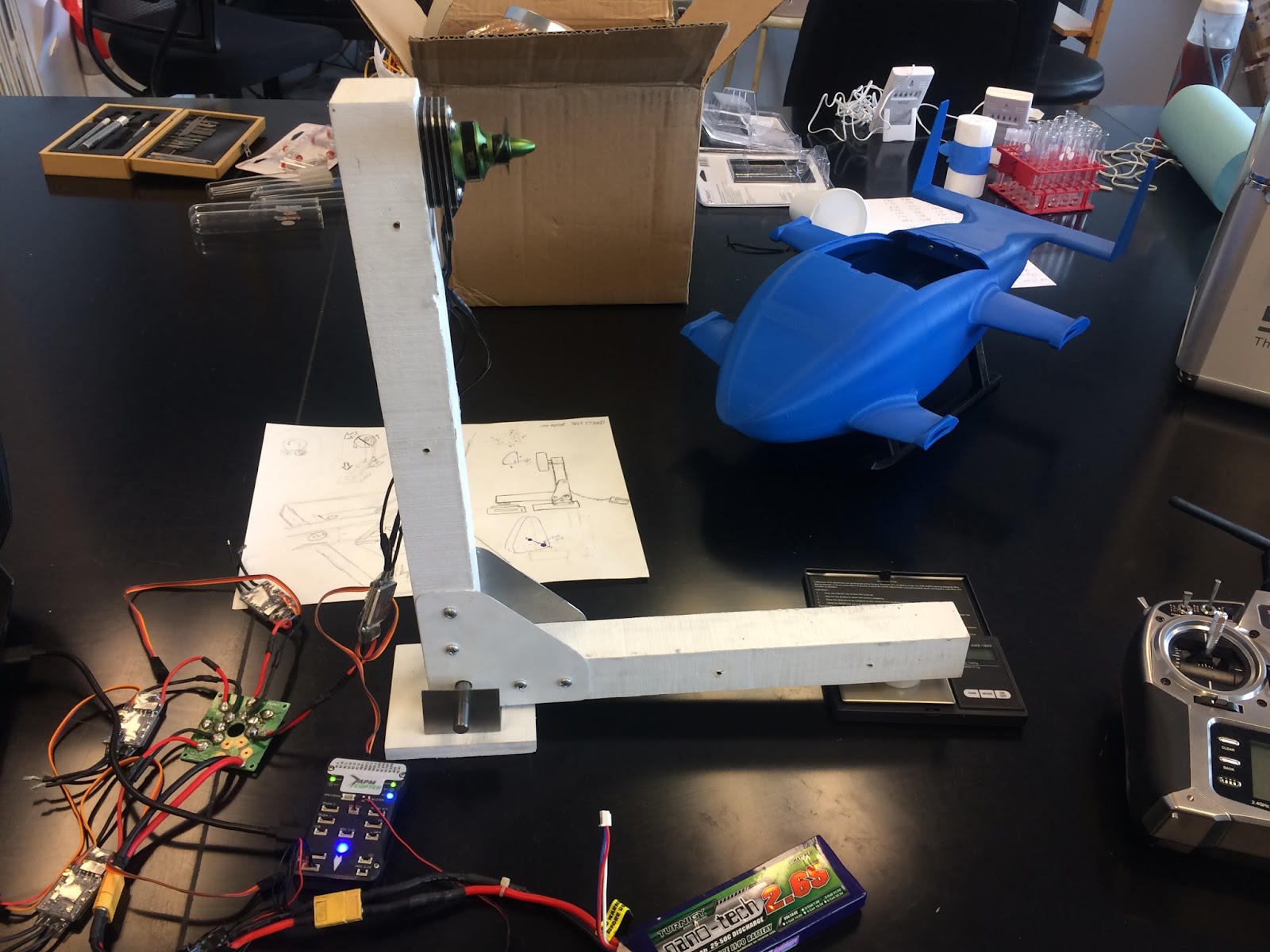 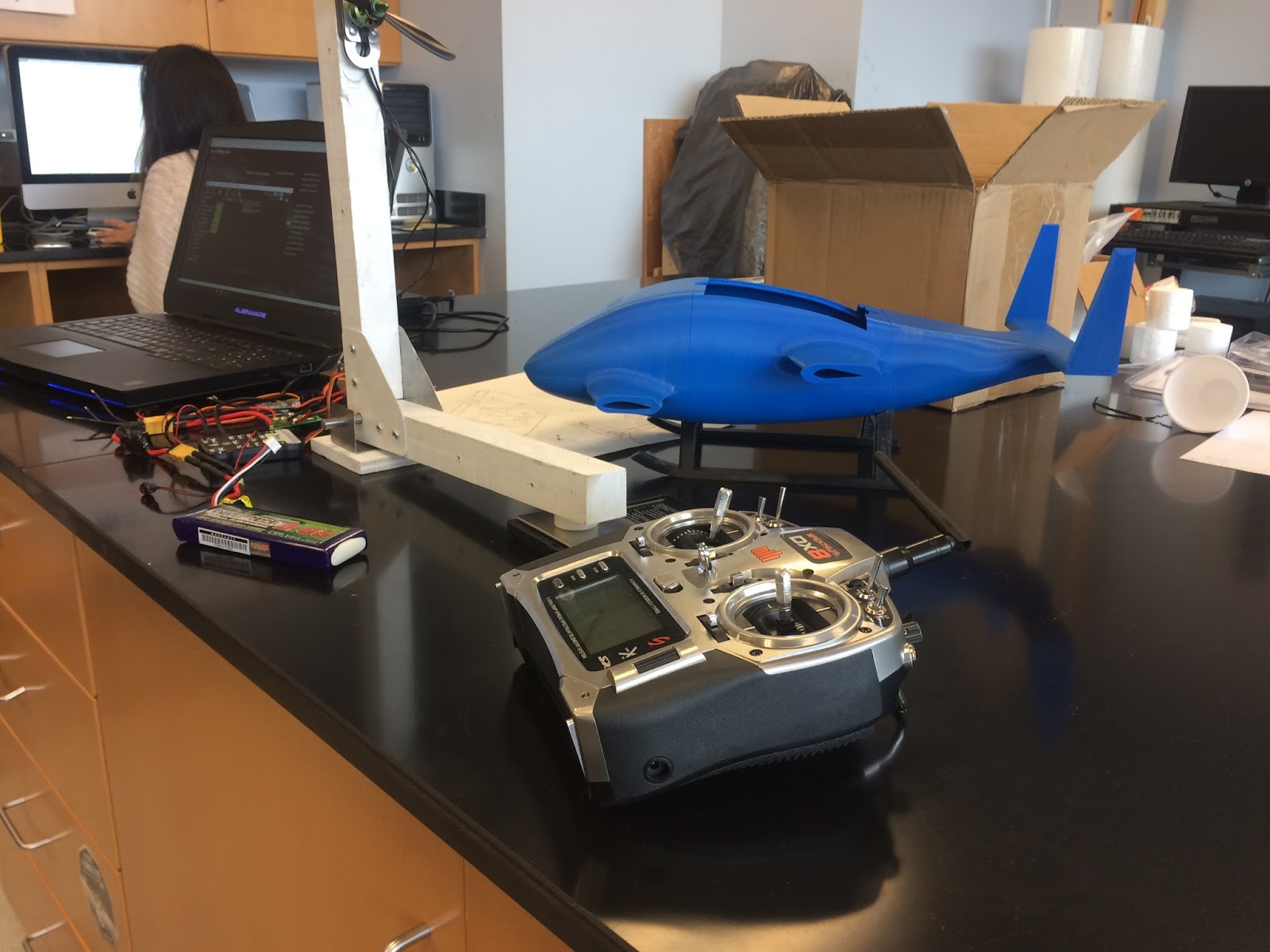 UV-4 V/STOL UAV is an unmanned vehicle designed to transport cargo via autonomous or remote pilot operations. With an interior cargo bay. The goal of our project is to convey payload at anytime, anywhere and in any condition.

This model was created as a means to display the potential of a duct fan rotor craft powered by multiple electric motors. The system made its launch in 2015, since then advances and improvements have been completed to the air frame and power plant configurations thus delivering an efficient means of lift using smaller and therefore quieter propeller then traditional helicopters.

The function of the duct system serves as a mean of channeling pressure and vectoring thrust, giving the UV-4 a unique control system and improved maneuverability. The design of a low speed "T-Tail" houses the function of yaw control with multiple rudders located on its vertical stabilizer, and elevators on its horizontal stabilizer. In addition, the rear duct systems may pivot up to less then sixty degrees forward and backwards to deliver the vector thrust where the aircraft needs it to be. The cargo bay may house up to four thousand pounds of deliverable payload. As its max gross take-off weight is designed to reach twelve thousand five hundred pounds.

The electrical systems on the aircraft use a network of batteries, generators, and its two electrical motors. Proving five hundred horse power each, totaling one thousand (1,000) horse power. An electrical charge then powers the mechanization used to spin the propeller to its desired rate per minute. Perhaps in the near future an additional system can be created to generate electrical charges from the spinning propeller inside the duct, and collect it, sending it back into the aircraft's power systems or recharging the battery. Aircraft by Rob Gomez & Kris Pyatt A coming major revolution to aviation are UAV's (Unmanned Aerial Vehicles) and Drones. Lets us first separate the distinction between UAV's and Drones although with larger Drones the area does cross over between the two types of aircraft.

UAV's are ground based piloted aircraft, mostly military at this point with the excellent General Atomics' "Predator B" being the current hollywood favorite casting actor in vogue. Drones are what what you buy in your local toy store although mostly it is in bigger electronic stores that are now the most visible distributors of this current in fashion fun tool.

The rules are clear in that UAV's can be over the horizon in operation, were as Drones have very specific rules in that the aircraft has to be less than 55gb, within your line of sight and restricted to 400ft AGL, and a load of restrictions in where you can and not fly.

The line is blurred above that of the basic rules of the use of heavier Drones. You do need then to become an actual pilot, sit an exam and prove you are totally capable of flying of which is in a sense is a commercial drone. A pilot certificate can also be issued under 14 CFR part 61 regulations (US). The rules are still tight, but you can use the Drone for many uses and for activities that involve people below in say sporting events and photography over cities.

I have followed the antics of fast food suppliers and Amazon in their desire to deliver pizza and parcels to your door, antics is the word and yet I may be ultimately proven wrong. But if you fly you would be familiar with the effects of variable wind patterns and lot of obstructions at low level flying that would mostly certainly render your Hawaiian pizzas to the pavement or simply dropping out of the air into your back garden, in other words a great idea but not realistic in the real complicated world. Although there is the benefit if it actual works of a Hawaiian and beef pizza colliding together above you and thus creating the perfect recipe before landing on your tomatoes to add in that extra Italian flavour.

But this UV-4 UAV is a very interesting and more practical machine. It has been created by the Bergen Community College in Bergen County, New Jersey USA. First it has electrical propulsion and not the usual heavy aero engines. However the biggest advantage as we will see is the sheer ease of the way it does fly and the absolute control and specific way you can allow the aircraft to travel from point to point. It could change the complete way we move around our planet in the future and have really great specific roles in the way it is utilised... In other words the UV-4 is the future. Basically the UV-4 is a streamlined box with four rotary fan nacelles with two small fans at the front (lifting), and the two bigger propulsion fans at the rear. The trick to the aircraft is not in it's shape or even the lifting fans as both technologies have been around for decades. But in the way the electronics control the dynamics of flight and speeds of the lifting bodies. This aircraft has a small central compartment with an opening door at the rear to deliver cargo, but at this size it is too small yet for commercial operations, it will be the same vehicle at a scale a little larger that would then make this flying machine viable.

The only visible worry is that the aircraft is very reminiscent of the Skynet controlled drones from the James Cameron "Terminator" films, so we will have a need to stay in control of the vehicle or the computers will take it over and wipe us all out with it...


Gimbal with HUD
The aircraft has a forward mounted camera system providing real-time visual perspective to the pilot station. The panel can be overlaid with any of Lockheed-Martin Prepar3D's sensor cameras. Stow the gear and switch out of the "hover" mode and with a slight push of the stick forward you can move into the direction you want to. You still have to balance the throttle to maintain your correct altitude, but otherwise you will move forward like a slow helicopter. So is this UAV like a helicopter to fly?

Well yes and no to the more of the yes. As you still have to balance the throttle to a helicopter's collective to maintain the right angle and height for the correct flight path but here without keeping the pressure of keeping the tail rotor in check. Otherwise you just turn and yaw like you usually do for turns.

Starting up the UV-4 is just very simple. If the power is switched on you just simply advance the throttles and those huge fans start to turn and power up, and this UAV sounds like a huge mega-death vacuum cleaner on speed. More throttle and the fans allow the aircraft to defy gravity. This is where the computer power comes in. The system has a built in Artfiical-Stabilisation that keeps the aircraft correct and level with you just adjusting for wind direction, and no wind means it will just go straight up! It is very easy to balance the aircraft on the throttle... and there is no fighting the yaw like you do with a helicopter tail rotor. Gentle turn of the yaw and the aircraft will do a complete 360º turn on the same spot, totally brilliant

Users browsing this forum: No registered users and 12 guests