Other precision : in the two same flights the HMD internal resolution was 4K (3840 * 2160 if remember well in flyinside and 1.75 Per Pixel Density Override in native VR via Oculus debug tool) - the gpu loads were about the same while flyinside seems to input 120 fps in rift vs 90 fps with native VR - and the cpu loads were a bit different : with flyinside the most used core (1st core) is Something like 10% less used (an average of about 80% load vs about 90% load with native VR) while the global cpu load is the same for the 2 flights (this 10% less load sems to be reported on other cores) - of course that was with the settings I used (no overloads gpu/cpu).

But increasing autogen in both cases makes fps decrease.

Here a picture of the first two flights monitoring, showing cpu usage (different for the second flight with flyinside : about 10% less usage on 1st core) 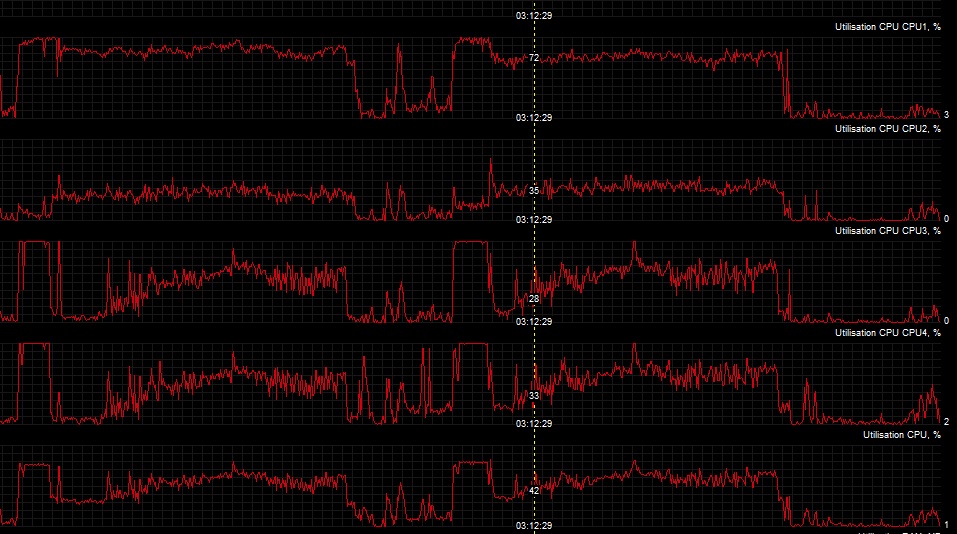 Good stuff! Thanks for the info. I seem to be having way better performance with FlyInside from version 3.4. I cannot fly in native VR. The visual is way too jerky, especially on the left eye of the Rift. I am getting an occasional flash here and there with really good frame rates. Are you getting those? What setting do you have your autogen? On the high side, I'm getting 72/90 on the frame rates, and I've seen it as low as 28/90, but surprisingly, is still smooth!

Yes I also have a flash sometimes with both VR modes.
I usually fly in mountains areas (mostly Alps) with 1-2 meters resolution photoreal textures, Lod11 terrain mesh, and HDEv2 (sky textures and clouds enhancement) with max scenery complexity (airports buildings and bridges/buildings in some cities) but no autogen at all. I sometimes use some building autogen but only with very light cpu impacting planes (like extra 300s) and/or above lightly populated areas. (that for keeping fps to go below 90). On big cities areas even scenery complexity has to be limited to keep 90 fps.

Testing a bit more the performances related to options activated or not are similar between flyinside and native VR (about same fps shown by Flyinside or P3d native counter). Cpu impacting options decrease fps in both modes, Cpu impacting planes can't run fine in both to (for exemple F-35 Lightning II can't run 90fps in native VR or Flyinside). Testing more T28A shows it runs the same.

But visual smoothness impression is still better with Flyinside (Flyinside fps counter shows 90fps inflight but Msi Afterburner shows that Gpu calculates 120 fps with flyinside instead of 90 with native VR or any VR application - and if fps decreases to about 80 fps with native VR it's still at about 100 fps with flyinside according Afterburner, that helping smoothness impression).
Personnaly I don't have problem with P3d native VR (as long as 90fps is stable), no left eye specific problem to, but clearly smoothness is better with Flyinside. That said I have to say that 90fps P3d native VR is not as smooth as 90fps in an other VR application (but hard to tell how or why).
Top

Users browsing this forum: No registered users and 31 guests