For all topics that don't fit into another category. Note that we cannot promise that any of these posts will be responded to by our development team.
Locked
80 posts

Hello,
I have exactly the same problem with the single pass rendering.
Depending of the position of my head object appears (and they should not), I didn't have this effect in flight.
I hope a solution could be find because this mode is really fantastic in term of fps ( 10 fps more), it is very pleasant to use.
The stereo mode is working way better also in 4.2 than in 4.1: I think I will definitevly fly in Vr in P3D without flyinside, next step maybe the Windows in VR (like with the oculus dash) !!
I also notice that the snow effect is better in single pass mode than in stereo mode !!

The images are consent and similar to others as I see on the forums.

No I haven’t uninstalled add ons as I have many and would not know where to begin not to mention the difficulties involved.

One thing I did do was I opted into the Orbx Fastlane option and ran FTX Central which updated my ObjectFlow to the new beta 2 supposedly. I had read this version of FTX Central was needed for P3Dv4.2 to work. So first I updated the v4.2 client then only updated Active Sky, opted into the new Orbx Fastlane for the first time, and rolled back to FSUIPC v5.122 I also deleted cfg and shader files as usual. I also upgraded to the latest Nvidia drivers from my 385.69 drivers to see if it would help but it didn’t

My other add on aircraft (A2A and PMDG) work fine as well as SPAD.next and VoiceAttack. The only other add ons besides Orbx Base, openLC NA, trees, and some of there airports is a few Flightbeam airports.


I’m wondering if the new beta Orbx files are causing the issue?
Is the new ObjectFlow necessary to get airports to work in P3Dv4.2 or for that matter even v4.1 because I wasn’t using it with version 4.1 and all seemed fine?

On a complete separate note, it would be great if Native VR supported the zoom function particularly one the could be toggled on and off just like FlyInside has enabled. Now that Oculus Dash supports embedded windows (although they still need to enable mouse capability so you’re not forced to use a hand controller) the only missing is zoom capability. Is there a reason why LM hasn’t deployed zoom capability since FI figures out how to it? I find it invaluable in these early low resolution days of VR.

It seems like you have a lot of addons going on in your install.

Could you try to reproduce the issue in default Prepar3D?

Perhaps but it would take a lot of work.

I did just role back to Orbx FTX Central v3.2.3.0 stable release instead of the lastest beta version 3.2.5.4 but it made no difference. My guess is it has something to do with Orbx or Ultimate Traffic Live (although I've turned UTL off with no difference) since this seems to be an object scenery issue that is transposing objects incorrectly unless i'm missing something in how this works. I'm clearly not the only person with this issue so there is a fundamental conflict somewhere.

I will need to think about how to uninstall or disable various add-ons to test P3Dv4.2 without anything else, it may not be worth it for now, I may just revert back and use FlyInside because as stated in the post above the ability to zoom is almost a must for me as well as the imported windows. Sure wish Native VR had these options so not to have to use 3rd party add-ons or the Oculus Dash function.

I went back and deleted all my Orbx and turned off UTL and had nothing else running with P3Dv4.2 but no difference. I still have ships showing up at the KSAN terminals and random roof tops at EGLL where I never had any Orbx installs to begin with. This is clearly a scenery conflict issue with something or something corrupted.

I may try a reinstall of v4.2 client which is all that I changed to begin with but I'm out of ideas

Can you take a screenshot of what you see? With VR enabled, press the "V" key. This will capture a picture of the screen and put it in your Documents/Prepar3D v4 Files.

For example, the circled item is what I see flickering in and out: 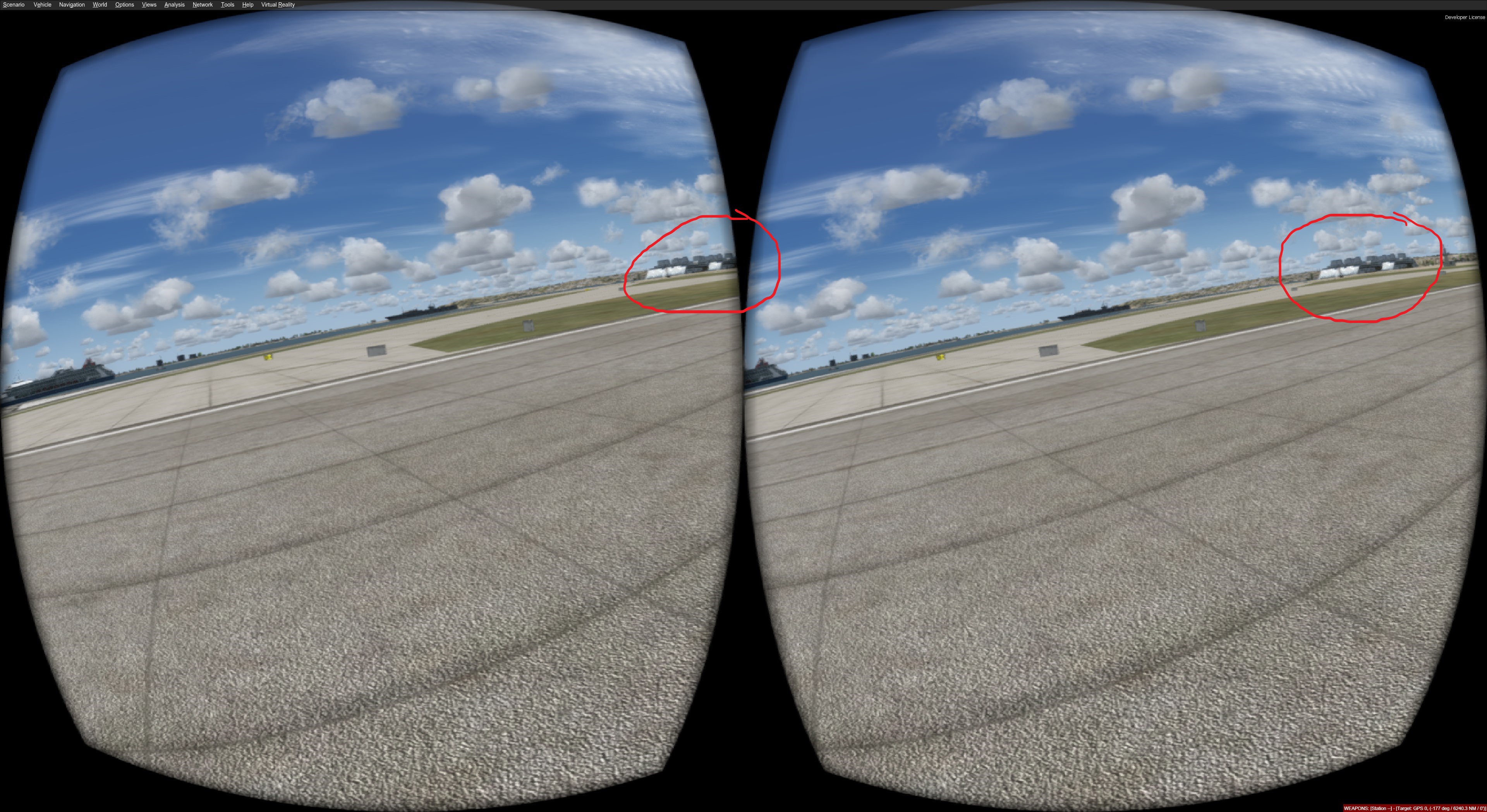 I'm aware how to take screen shots but it was easier to actually take photos of the screen.

Were the images I linked in the post above not sufficient or of high enough resolution, they captured several items pretty clearly?

Here are the links again at a higher resolution and the file names describes the objects and locations:


I can't get anymore screen shots because I gave up and re-imaged my disk back to before the v4.2 client update and all the other uninstall of add-ons you wanted me to try.

Please acknowledge the re-posting of these links was worth my time and that you were able to view them this time.

Were the images I linked in the post above not sufficient or of high enough resolution, they captured several items pretty clearly?

I was moreso wondering about the artifacts you were seeing without any addons installed.

I hope that helps

She's asking if you still see these objects if you uninstall your add-ons to help her narrow down the cause of the problem.

I appreciate the clarity and I understood her response and I had answered yes nothing changed at all, I hope this helps.

I also understand if it can’t be replicated there’s not much that can be solved.

If you look at the objects appearing I believe they are from the P3D scenery library and somehow are being rendered on top of the existing scenery in a translated wrong position. I believe the ship I am seeing on top of the terminal is the same cruise ship that gets positioned in the scenery at the cruise ship dock several hundred yards to the southwest and likewise with all the other objects. I see the same familiar objects in other locations as well particularly ships at airports near water etc...

Not much luck posting photos hope these links work

Users browsing this forum: No registered users and 9 guests