For kids studying geometry and physics in school, fun might not be the first word that comes to their minds. The National Flight Academy is changing that perception through hands-on learning experiences that make science, technology, engineering and math (STEM) curriculum relevant and exciting. 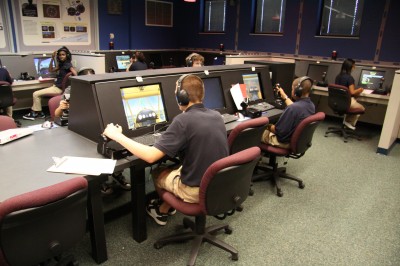 “Our nation is facing a shortage of skilled STEM professionals,” says Shikada. “Consider that the U.S. is ranked 35th in math education and 29th in science education worldwide. Stats also show that the U.S. has made no significant performance gains in science over the last four years.”

“To reinvigorate the American spirit of innovation in science and technology the National Flight Academy is focused on inspiring and educating young minds by tapping into their sense of adventure and passion for technology,” Shikada says.

The academy offers a series of integrated programs that use immersive, story-driven aviation experiences to help students master learning standards in the classroom, at community venues and through an in-residence program aboard the NFA Ambition, a new land-based simulated training aircraft carrier.

Since 2009, the National Flight Academy has brought ACE labs to schools from Florida to Alaska. A typical ACE installation consists of a series of individual computer workstations, multiple full fidelity Prepar3D® flight simulators and an air traffic control station, says Shikada. The current programs are intended for young people in grades 7 through 12.

Lockheed Martin donates its Prepar3D simulation software as the engine for delivering the immersive learning experiences. Lockheed Martin has also donated more than $2 million to the National Flight Academy.

A recent assessment of the classroom program shows participating students are scoring significantly higher on standardized tests for math and science, with fewer disciplinary issues and better attendance, says Shikada. 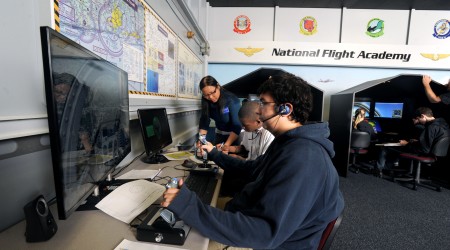 “It’s amazing seeing these kids’ faces light up when they work with their peers on a challenge. What’s even better is seeing the light bulbs go on during game play when they understand a math or science topic that they were having difficulty mastering,” says Shikada.