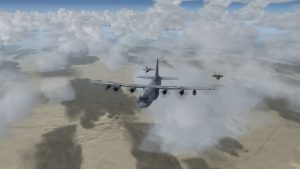 In addition to the numerous core features and enhancements, Prepar3D’s open development architecure keeps expanding with multiple new updates to the Software Development Kit (SDK). Developers have even more power and freedom to create new and exciting content blurring the lines between simulation and reality. Additional tools are available including the ability to place windows and panels in 3D space, improved scenery placement accuracy, as well as multiple new services, functions, and callbacks with even more robust error reporting and handling.

The Professional Plus version also features many updates including basic support for Common Image Generator Interface (CIGI) version 3.3 and 4 along with numerous improvements to the Distributed Interactive Simulation (DIS) interface. Multiple improvements have also been made to SimDirector, Prepar3D’s built-in advanced scenario creation tool, including AI enhancements, trigger and validation improvements, greater stability, and improved usability.

The Prepar3D v4.3 update is available now and can be downloaded from the Downloads page. If you currently own a valid Prepar3D v4 license there is no charge to update to Prepar3D v4.3. To purchase Prepar3D v4, please visit our online Store.

Prepar3D offers separate updates for the Client, Content, and Scenery. This will make updating faster and easier than ever before. Please be sure to read the Prepar3D v4 Download and Installation Instructions for more details on how to quickly update to the v4.3 release. Please refer to the What’s New below to see what each installer contains. Most users will only want to use the Client installer to update.

The next update for Prepar3D v4 is here! Prepar3D v4.3 takes simulation to the next level offering new features including interactive panel windows in virtual reality (VR), improved scenery dynamic lighting performance, as well as numerous user interface (UI) enhancements, various stability and performance improvements, multiple bug fixes, and much more. Many updates were also made to the Software Development Kit (SDK) giving developers more power to create new and exciting content blurring the lines between simulation and reality.

The following list of updates has been categorized based on the installer required. The Client installer is required for Prepar3D v4.3, however the Content, Scenery, and SDK installers are optional. You must first have Prepar3D v4 installed to utilize the Client only installer. To install the Prepar3D v4.3 Client, you must first uninstall the previous Prepar3D v4.0/v4.1/v4.2 Client through Programs and Features in Windows Control Panel.

The Prepar3D v4.3 Client update will require you to reactivate your product, however if you have an internet connection it will be automatic. Please view the Prepar3D v4 Download and Installation Instructions for more information.

We hope you find that Prepar3D v4.3 continues to be the most immersive learning, simulation, and training platform available.