Inspiring the Next Generation of Science and Technology Leaders
February 29, 2012

Florida middle schoolers had a chance to hear from the legendary Tuskegee Airmen and fly in Lockheed Martin Prepar3D during a February ceremony at the South Orlando YMCA Family Center.

Of that sum, $58,000 was directed to support one year of programming at the Lockheed Martin/YMCA Technology Center, the addition of the “Vision of Flight” Aviation Technology Program and the YMCA Teen Achievers engineering cluster. Oak Ridge High School received $45,000 in the form of a Project Lead the Way grant and support for its FIRST Robotics team.

“What we are doing here changes children’s lives in real ways,” said Jim Ferber, President and Chief Executive Officer of Central Florida YMCA. “The Technology Center enables children to do things they wouldn’t have the opportunity to experience otherwise. We are incredibly proud to be partners in this effort with Lockheed Martin.”

The “Vision of Flight” Aviation Technology Program will begin in the summer at the Lockheed Martin/YMCA Technology Center, providing students the opportunity to explore the fields of aviation and aeronautics using computer-based simulation and hands-on training.

The Technology Center was created in 2008 when Lockheed Martin and the Central Florida YMCA partnered to open the nation’s first community-based high-tech learning center. Together, they continue to engage students in math and science, creating a foundation for success in the classroom and in future careers.

During a question and answer session at the ceremony, Tuskegee Airman Lt. Col. Leo Gray offered insight into the beginning of his aviation career. “When I graduated in September of ’44, a number of us in my class put down our preference of airplane, the Lockheed P-38 Lightning, which we thought was such a sleek airplane at that time.” 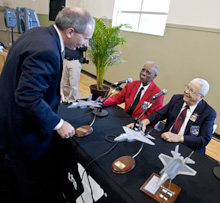 Seated with his fellow Airmen, Lt. Col. Gray noted that sleekness had been carried over to Lockheed Martin’s F-35 Lightning II, the nation’s newest fifth-generation fighter whose three variants will replace at least seven types of aircrafts around the world.

Reflecting on the impact education and engineering have had on his career, Lt. Col. Gray told the audience that he wanted to be an engineer his entire life, eventually earning both bachelor’s and master’s degrees in the field.

In addition to the “Vision of Flight” Aviation Technology Program launch, Lockheed Martin employees showcased the engineering impact to everyday life and career opportunities made possible by studying science and math through facility tours and school visits Feb. 20-24.

“This year, our company marks our centennial, 100 years of innovation,” said Denise Saiki, president of Lockheed Martin’s Global Training and Logistics business. “In Central Florida, our National Engineers Week activities and year-round projects like Engineers in the Classroom provide students with real-life glimpses of engineering work, demonstrating the great difference they can make by becoming engineers. We remain committed to STEM education.”

Orbx have announced the immediate availability of their New Zealand South Island (NZSI) scenery addon as a Side-by-Side License (SBSL).

This license will activate NZSI in Lockheed Martin Prepar3D if you have a copy of Orbx FTX NZSI installed for Microsoft Flight Simulator X (FSX).

Orbx Announce FTX Australia for Prepar3D
February 23, 2012
We are very pleased to inform the community that Orbx have announced availability of a Prepar3D license for FTX Australia SP4.  Great news and a great product!
http://www.fullterrain.com/product_australia.html
John
Get Connected with Our New Video Tutorials
February 15, 2012

Get an insider’s tips about Lockheed Martin Prepar3D by watching our new tutorial videos! Software engineer Max Perry provides step-by-step directions highlighting what you can do in Prepar3D. The first two tutorials walk you through how to join and host training sessions in Prepar3D using its multi-player capability. Get connected with colleagues around the world in distributed training exercises and take your preparation to the next level.

Watch the tutorials at our videos page.

02-27-20
Prepar3D at FlightSimExpo in Las Vegas this June